Narayan and Narayani Sena – A Lesson for Mid-Career Individuals 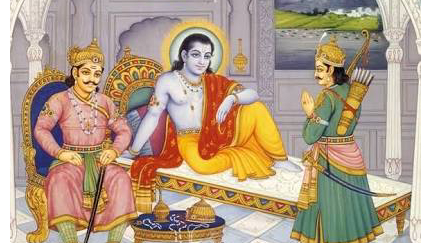 Posted at 12:00h in Mid Career Change/Transition by kavita

The great thing about retelling/ re-reading stories from the epics is that they offer varied kernels of wisdom depending on what you need at the time. Take the ever-popular story from the Mahabharata on Krishna being approached by Arjuna and Duryodhana before the battle begins to seek his blessings and intervention on their respective sides.

Now as this story goes, Krishna was sleeping in his chamber and Arjuna and Duryodhana both arrive. Arjuna arrives first and takes his position at the feet of Krishna, waiting for him to awake. And Duryodhana waits at the head of the bed. When Krishna awakens, he sees Arjuna first and then Duryodhana. So he offers the right of first choice to Arjuna, asking him to choose between Narayana (himself) on one side, unarmed and not prepared to fight and the mighty, one million strong Narayani Sena (Krishna’s army) on the other.

For Arjuna, the choice is easy and he unhesitatingly chooses Narayana over the Narayani Sena. Duryodhana is pleased by Arjuna’s choice, and the thought of adding the mighty Narayani Sena to the Kaurava’s ranks, gives him a feeling of great strength. The Narayani sena is said to have consisted of at least 10 million warriors, 7 Athirathas (supreme warriors), 7 Maharathas (great warriors) and had fought and won several battles. Having the Narayani Sena fighting on your side, was obviously adding tremendous battle ready resources to you and could confer a huge advantage.

In the re-telling of this story, I found that it beautifully extends itself to the experiences of mid-career professionals. Mid-career is that stage of our professional lives by when we have explored some of our potentials, acquired tangible skills, expertise and achievements. Often these achievements become, so to speak, the first calling card in our professional interactions and those interactions aimed at furthering professional prospects. For all practical purposes, we may look like successful professionals – success being marked by our expertise, the positions we have reached and what we have accumulated – titles, wealth, degrees etc.

Now coming back to Narayana and Narayani Sena in the context of mid-career.

Narayana stands for the innate potential within us. Some of it is known and yet much of it may be unknown in the sense of its exact manifestations and the forms that it takes. Narayana is who-we-are. For mid-career individuals, much of the dilemma of taking the next step professionally, which may sometimes even entail a significant shift, is about connecting to the Narayana within. In fact, the very reason for a mid-career crisis among many individuals at this stage, is because they feel disconnected from their deeper aspirations, the Narayana within, and are instead following a paradigm of success which feels somewhat alien.

How does one connect to the Narayana within? This requires expanding one’s own definition of ‘who-am-I’ to include potentials which may as yet not be visible and yet which are present. For the mid-career individual who is going through a period of re-examining her priorities and searching for direction, acknowledging and connecting to the Narayana in herself is the first, important step.

Narayana within are one’s deeper aspirations, little hopes and joys that make one feel alive

Connecting to the Narayana within also means getting in touch with the universe of feelings which often remains unarticulated among mid-career professionals. While apparently successful mid-career professionals are valued for their skills, expertise and the networks they may have cultivated, organizations and indeed, they themselves may neglect the inner ambience created by their deeper aspirations, hopes, frustrations. This inner ambience affects the deployment of their skills and abilities.

Narayani Sena is what-we-have. It refers to the tangible – professional achievements, pedigree in terms of past employers and educational qualifications. All of these provide measurability and evidence and offer a great degree of comfort and strength to those in search of resources (as Duryodhana). However, choices which are based on seeing only what is manifest, as in the case of Narayani Sena, often miss something very valuable. We all know mid-career individuals who experience deep regret for some career missteps they may have taken – a hot-shot corporate finance executive who had given up a promising career in music, or a technology professional who feels that she should have followed her entrepreneurial dream a few years ago. These regrets and the disappointment make even future successes look pale and insipid and eventually take a toll on the well-being of individuals. Individuals in such mid-career throes, have the tangible equivalent of the Narayani Sena in ample measure, but the Narayana within needs replenishment and restoration.

Both mid-career individuals and employers, would do well to pay heed to the Narayana in addition to the Narayani Sena which they bring. In the balance, doing so leads to better outcomes. Even Duryodhana (as the employer equivalent) did not bargain for a large part of the Narayani Sena eventually not fighting on his side (Balarama made his faction of the Narayani Sena stay out of the war and Satyaki took his faction to the other side and fought for the Pandavas). The parallel here is that when the inner ambience of feelings is ignored, using one’s skills and abilities in the best possible manner becomes difficult.

Eventually though, I find from my own experiences of going through mid-career transition, connecting to Narayana requires love and faith. Which is why Arjuna, with his immense love for Krishna effortlessly chose Narayana, while Duryodhana did not. Love and faith may seem the wrong parlance when it comes to professional choices, but in the case of transitions such as mid-career ones, love for oneself in the form of self-acceptance is perhaps the most critical. It allows one to fail, deal with the uncertainty and even rejection that transition brings and finally emerge with a greater degree of faith in oneself. By working on the inner stories that we tell ourselves about ourselves, it is possible to develop love and acceptance of oneself. And of course, love and faith reposed by the other (as Arjuna) in Narayana allows for the full expression of Narayana.