Using Myths to understand the Future of Work 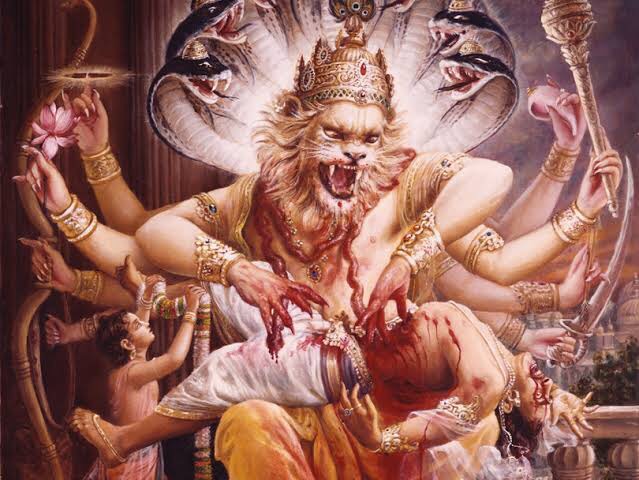 03 Aug Using Myths to understand the Future of Work

Posted at 03:05h in Future of Work by Kavita

I have always marveled at the power of stories and myths in helping us make sense of our (personal and collective) psychological realities as well as in understanding broader socio-cultural-economic shifts. Myths find their reflections in reality and studying them gives us another frame with which to understand what is happening around us. To that end, I will use the example of Narasimha to show how myths can help us understand the future of work.

Narasimha is the fourth avatar of Vishnu, half man-half-lion (Nara meaning man and Simha meaning lion). He comes after the earlier three avatars of Matsya (fish), Kurma (tortoise) and Varaha (boar).

Legend has it that Hiranyaksha and his elder brother Hiranyakshipu were oppressive demons (Asuras). Hiranyaksha was defeated and killed by the Varaha avatar of Vishnu, the mighty boar with its huge tusk. Enraged at the death of his brother, Hiranyakashipu, the elder brother performed intense penance and received a boon from Lord Brahma that he could not be killed by either man or animal, during day nor at night, not inside nor outside, not above nor below and not by weapon nor by tool. This boon made Hiranyakshipu immortal and invincible. Hiranyakshipu pretty much acquired a God complex, and was furious at his son Prahlad who dared to worship Lord Vishnu, and who challenged his father that a greater power exists everywhere, even within the pillars of his palace.

Hiranyakshipu smote one such pillar and out of it emerged Narasimha, half man-half lion. The strange creature grabbed Hiranyakashipu and dragged him to the threshold, which was neither inside nor outside, placed him on his thigh (not above nor below), at dusk (not day or night), and tore him apart with his sharp claws (not a weapon nor a tool). And thus was defeated an invincible force.

Enter the shape-shifter Narasimha or the creature which is neither man nor animal and belies straitlaced categorisations. Narasimha to me stands for the new breed of shape-shifting, multi-potential, boundary spanning people who are attracted to wicked problems. Among these ‘creatures’ who may still be regarded as oddities, form is trumped by intent and a unique ability to take on wicked problems. They stand at the boundaries of domains, educational qualifications, functional specializations – neither inside nor outside and they may even choose to work on wicked problems at a time which is neither day nor night! Their sharp claws are a potent mix of weaponry and sophistication in tools – diverse experiences, skills, breadth and depth of self and other awareness.

There is perhaps no doubt that the future of work is about solving wicked problems. But is your organization/entity geared to engage with Narasimhas, culturally and structurally? Are you ready as hiring managers or business managers to reframe your expectations about the form in which talent works to solve wicked problems and how you will support them in this? Can you provide a fertile space for nurturing Narasimhas by allowing them to tap into their curiosity and natural affinity to certain kinds of wicked problems?

And finally, if you are an individual who wants to be at the cutting edge of solving wicked problems, what’s your plan to evolve into a Narasimha?